It has been a different kind of summer and, as my previous post suggests, one that has provided little in the way of motivation to sit down and write. I have discovered that writers block is a weight on your brain that gets exponentially heavier the longer you go without actually taking the time to put words to the page (or screen.)

So here I am, trying to get rid of some of that debilitating weight.

Things are changing. If you know me well, you know how difficult this is for me. Always one for the predictable, I become irritable and sluggish when I realize that my world is moving in a new direction. But I'm growing older and, like the slow learner I can sometimes be, have realized that the tomorrows will often look vastly different than the yesterdays. I don't have to like it, but I'm coming to a place where I get it.

So that's it. You probably wish my return to blogging was longer and contained some funny or poignant story. But this is all you get. I'm taking baby steps back into the world.
Posted by Craig at 9:09 PM 1 comment:

Man, that was exhausting.
Posted by Craig at 8:57 PM 2 comments:

For almost eight years now I have been able count on at least one constant. Regardless of how tragic, joyful, busy, or boring my life has been at any given moment, there has always been a Lake kid around to give it meaning and color. I've shared this many times before, but the day after Kyle and I met, Avery was born. And in ways that had yet to be seen, I was as well. Two years after that, in the early morning hours of a hot July day, Sutton and Jude arrived and breathed the cool wind of chaos into my life and the life of our community. The best description of these three kids are that when they are in the room, there is force-- a palpable awareness that the tectonic plates of the immediate vicinity could shift at any time, releasing joy, pain, despair or silliness, sometimes simultaneously.

If you've read my blog for any amount of time, you know they are the source of my best stories and the reason I have had to keep moving, one step at a time. It is because of this that my upcoming week will be one of the hardest I've had to endure for quite some time. Jen and the kids are leaving the sacred grounds of Waco for the sunny skies of California. I am being honest when I say that, for numerous reasons, this is a good move for them, giving them the opportunity to be together in a new place with new faces and the fresh balm of adventure to help further heal their souls. It's almost enough reason to make the emptiness I feel somewhat bearable.

In my dresser drawer is a small collection of things that have ended up in my pockets over the years-- A feather Sutton found outside of school one day; A beat up Indianopolis Colts matchbox car Jude picked up in Cameron Park; A purple hair clip of Avery's. In each case I was asked to put it away for safekeeping until they got home, and in each case I was promised to swear that I wouldn't lose it. Well I have kept the promise not to lose these things, but I'll keep them with me until I am asked to return them. Of course until they learn to read blogs I doubt they will remember these things they handed to me months ago. In the meantime I'll continue to keep them safe and will hold them as artifacts, holy reminders that a large chunk of my life has been filled with nothing less than the Breath of God. 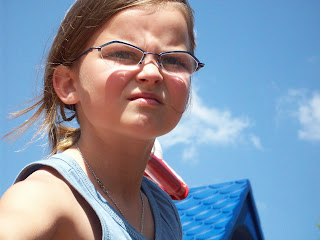 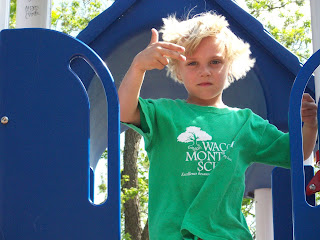 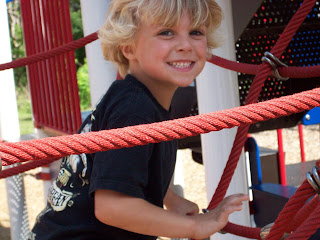 Happy Fourth of July everybody. If you have some free time today, you should read THIS ARTICLE, which was the cover story for Time Magazine this week. I found it quite insightful.
Posted by Craig at 9:49 AM 1 comment:

This afternoon I brought my dog Jane from my house to Tom and Beth's, which I am staying at while they are gone on vacation. As I opened the gate to the back yard Jane spotted a squirrel.

Jane has always dreamed of catching a squirrel, but up until that moment it was a statistical improbability for her, since I normally have her on a leash. In the split moment after the door was opened she looked at me, I at her, and we both realized, to my fear and her joy, that there was no leash attaching us. Like a thoroughbred straight out the gates, she quickly created distance between herself and me and aimed her snout like a heat seeking missile toward her intended target.

I assumed the squirrel would run to the fence, climb up it, and the chase would be over as quick as it started. It made it to the fence, but didn't run up it. I quickly saw that the squirrel was small, probably young, and was just getting it's running legs, not quite sure of it's climbing abilities. It turned around, her possible killer a split second behind her, then ran UNDERNEATH Jane, causing my dog to jump so high and awkwardly that she tumbled over.

Quickly regaining her footing, Jane repositioned herself and picked up speed again. At this point the squirrel was heading in my direction. There was a tree between me and the squirrel, so (again) I assumed it would scale the tree. No such luck. As it passed the tree, there was only one thing in between it and a small opening at the bottom of the fence-- Me.

In that small moment I had a couple of thoughts. One was about all the series of rabies shots in my stomach I would soon be forced to endure. The other was a question of whether or not I wanted Jane to catch the squirrel. I began weighing the options. (Yes, all this happened within a small window of time) If she caught it before it reached me, then I'd be safe from rabies (and the subsequent rabies shots.) It would also be good for her self image to accomplish something that is in her blood to do, which is to catch and kill something.

Then I thought about the blood. I would have to clean up the blood. And, my dog would know what blood tasted like, which could turn her into Cujo.

I then realized that I have to stop thinking of nonsense, because there is a squirrel just five feet away from me, and it began eying me like I was a tree. A tree that is manageable.

The rest is a blur to me. All I remember is being air born, trying to create vertical space between me and the rodent. It made it to safety.

As we walked up to the house I looked at my dog. It appeared as if she had a look of satisfaction. I didn't catch that thing, she seemed to be saying, but DAMN that was fun.
Posted by Craig at 10:58 PM 1 comment:

Things have been relatively quiet in my world lately. As far as summers go, this one has been uneventful. Here's some random stuff I've enjoyed lately...

-- I've been loving the new country group Lady Antebellum. You should check out their songs Love Don't Live Here and Things People Say.

-- I spent much of the first part of the summer trying to read the Bible more. I read the book of Acts and then moved on to I and II Samuel. There's some crazy stuff in the Samuels, such as the use of a Sylvia Browne-type character to call up the spirit of Samuel. I had not clue. Crazy, crazy.

-- There's a great article in this week's Time Magazine about patriotism. It explains the differences between how conservatives and liberals view what it means to be patriotic, and then shows how both side needs to embrace a little of the other in order to have a more complete, and humble, patriotic fervor. It includes thoughtful articles by both McCain and Obama.

-- It's been hard to get into books lately, but I'm excited because Kathleen Norris has a new one coming out in September.