I somewhat sheepishly announced to people at lunch that I kind of feel like it was God who had me meet the couple I met after church today. And as you know, I'm (perhaps sinfully) hesitant to assign anything to God, even the glaring obvious things. If it was God, I'm not sure what the purpose was. Maybe just to bring a little more happiness to the past few days, which were already being good to me and bringing me out of my week and a half funk.

If you've been around me, or if you've read my blog, you've heard me mention on several occasions the book Little Chapel on the River by Wendy Bounds, and how it was one of the best pictures of what true community looks like. The book tells the story of Guinans, a general store and pub located in Garrison, New York, just across the Hudson River from West Point. People from all walks of life, governors and janitors, soldiers and peaceniks, had called Guinans their home away from home for over fifty years. One guy who moved away from Garrison but drove over fifty miles once a week just to hang out at Guinans dubbed the pub his church. Thus, The Little Chapel on the River. (I wrote about a note I received from the author in my year end post found HERE.)

Today after church as I was making my weekly post-service walk to the back restroom, I overheard an older couple, parents of a recent graduate, walking in the backside wondering amongst themselves if the church was an old store. Eavesdropping, and a tour guide at heart, I confirmed that it was and struck up a conversation-- Hello, how are you, where are you from, type thing. They said New York. Me, as if I am an expert at New York geography (I'm not) asked where in New York. They replied the Hudson Valley, just across the river from West Point. Imagine their pleasure when I shrieked like a kid, "Garrison?!"

It turned out that they were from Garrison. They were regulars at the Little Chapel for years and said their daughter practically grew up there. As we talked about the pub they would mention names of friends of theirs, people who I had recognized from the book. It was a great experience. And out of it, I received an open invitation to come stay with them anytime I'm in New York.

So the moral of the story is that it pays to read. Or maybe it just pays to have a bladder that instinctively needs emptying at the end of church.
Posted by Craig at 6:38 PM 1 comment:

"Time Keeps Moving From a Crawl to a Run..."

Early in When It Don't Come Easy, Patty Griffin wonders four times if we'll ever get home tonight. If I had to assign words to the past week or so, those would be the ones. It hasn't come easy. Realization that my world is about to change in ways both revolutionary and minute has stunned me into a scrambling stupor to try and find some solace and direction. The thought that this great idea of "home" is the great North Star by which we find our bearings has bore down on me and I have tried to figure out what the next step will be, and where mine is.

The protagonist in Leif Enger's new book So Brave, Young, and Handsome, is an author who has struggled for years to match the success of his debut novel. He said that in his stories if he ever approached running out of material or needed to move them along to the next place, he just through a river in front of the characters and waited to see what they would do with it.

Tonight I had dinner with two of my closest friends and their son at a restaurant on the river. It was a perfect evening that topped off a not-so-perfect few days. During the silences I thought of that Patty Griffin song. I thought of the people who have driven out to find me as I broke down, and have stayed by me when it didn't come easy. I looked out over the Brazos, ducks heading where they needed to be and the water shimmering in the mid-evening early-summer sun. In the silences I wondered if I would ever get home. 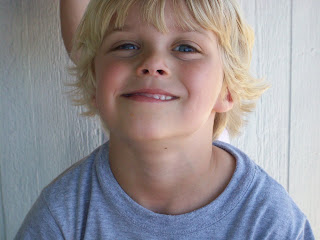 This is a letter I wrote to Jude a little over four years ago.

Jude: Craig, what are we going to do today?
Me: I don't know, I was going to take you to the park, but it is very wet from the rain. So I think I'll take you to Chic-Fil-A to play on their playground.
Jude: Can we have Ice Cream?
Me (seriously contemplating the proposition): I don't know, maybe.
Jude, with excitement: Yay!!!!!
Me: I didn't say we would, I said MAYBE.
Jude: Yeah, but with you "Maybe" always means "Yes."

(later at Chic-Fil-A, the four of us nose deep into vanilla ice cream cones, Jude looking sideways at me with his silly eyes)

So although I am offically "back," I have yet to drum up the energy to post anything. I mentioned to a friend today that although I'm pretty sure I've never been "clinically depressed," the fast few days have been the closest I've come to brushing shoulders with it. This has given me no energy to write. But alas, Danielle has tagged me, forcing me out of my self-pitying slumber. She has asked that I share six random things about either myself or my week, and then to tag someone else.

1. This week I found a great place to live when my lease here on Washingon expires at the end of the month.
2. In the past few hours I have had a conversation that will probably alter my future.
3. I used to want everyone to like me. Now I am indifferent to about 99% of the people I know, but have about a dozen people that I spend my life trying to win the comraderie and affection of.
4. Many people already know this about me, but I have a deformed right big-toe. It looks broken.
5. One time early in elementary school (like first or second grade) I was walking down the hall, by a row of coat hooks. I had this thought, "I wonder if I will remember this moment next year?" The next year I remembered that moment. Ever since then, I think about that moment about once a week.
6. I sometimes think of (and hope for) a day when I am cool, calm, and collected. When this comes I will be able to smile at whatever comes my way, and will have a calm, detached assurance that I will be ok, regardless of what I am going through.

I'm back. After months of mooching off of Robin Howard's kindness, I have finally dropped the dollars to have my laptop fixed.

I'll return to blogging soon. A lot has happened in the past couple of weeks, so stay tuned.
Posted by Craig at 8:42 AM 4 comments: